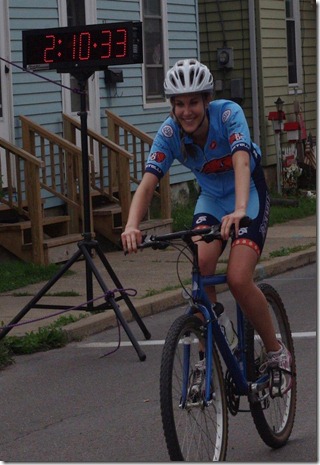 This past Saturday morning, 11 Bucknell Cyclists cruised into Milton to participate in the locals’ yearly festival.  In the process, Rio was able to sprint for a second place overall finish, and as a whole, Bucknell earned 1st place in the team competition.  Despite the hectic start, highlighted by my terrible call for a 7:20 breakfast, (the caf was closed), we figured it out and stumbled over to Milton just in time.  The entire team was spread out across the pack of over 200 riders at the start.  Among the newbies, we had Eric looking super pro with the sweet Bucknell aero helmet, Audrey riding Kolbe’s mountain bike, and Kolbe riding a 9 speed road bike with a 8 speed cassette mounted on it.  I decided to keep that little detail a secret.  Lets just say when he told me at the end of the race, “my chain kept falling off,” I knew why.  In typical Milton Race fashion, the start was completely insane.  People were falling, struggling, bumping, whining, crying, complaining about how Lazer’s superior form was unfair to the other competitors…etc.  There was a major split on the first steep climb, allowing Sam, Dan Wood, Lazer, and I, to establish ourselves amongst the elite of the chaos.  Behind us, I am pretty sure that Noah and Craig were tooling around with a group led by Grimes, while presumably the rest of our gang: Eric, Christine, Audrey, Kolbe, Harry, and Max, were attempting to make sense of all the mess.

On the second large climb, Lazer and I paced Sam to the front of the “superstar” group, putting him in good position to get over the thing at the front.  Lazer presumably soft pedaled the whole way, while I slugged myself up in literally last wheel to just keep in contact with the lead group.  Dan Wood decided to do his own thing…but he would be back before the finish.  There were rumors that Audrey may have used her feet and some type of running technique to get over this climb…but I can not confirm such gossip.  Below are some pictures of the team riding back from the race…as well as D Wood just following the finish.

Back to the race however!  After the 1.5 mile climb right in the middle (you all know what I am talking about) the race settled down a bit.  Some crazy guy in a muscle shirt kept going to the front and annoying me and Sam as he turned up the pace at the front, but other than that, we were essentially preparing for the finish.  With about 4 or so miles to go, I was telling Lazer and Sam “alright guys we are going to attack on the big climb once we get into Milton,” a voice I didn’t expect responded.  It was DAN WOOD!  Good ol’ Wood had ridden back to the lead group after taking his time up the big climb.  We had a leadout train all set to go.  I was to be the front, followed by Wood, Lazer, and then Sam to finish it off.  It got a little chaotic up the steep climb heading into town, but we figured it out and had a sick 4 man leadout on the front of the race as we rode through Milton.  Dan Wood and Lazer did some huge pulls on the front, positioning Sam for an extra long sprint to the finish.  We all sat up and cheered as Rio sprinted as hard as he could for the line.  Sam ended up getting edged out right at the end, but what an awesome race it was.  Below is the finish.  Thanks a lot to Wade for getting pictures of the finish, as well as to Papa K for showing up to surprise us!

After we finished, a bunch of riders from the team rode back to make sure everyone else was heading in ok.  A good portion of the team encouraged Kolbe and Christine on their way up the final climb.  We also saw Eric and Max finishing strong through town.  Sam, Lazer, and I got lost however trying to find Audrey.  Our poor navigation skills caused us to veer of the course while looking for her…and she later informed us that she had actually seen us going completely in the wrong direction.

In the end, this was an extremely proud day for me and the rest of the veterans of the team.  I couldn’t have asked for a better group of individuals to spend this Saturday with.  Everyone gave it their all, whatever their experience as a bike rider, or for that matter, whatever their “condition” from the night before.  Despite the fact that many of the younger guys and gals had bikes that were questionable at best, they all persevered through their first race as a Bucknell cyclists.  Big props to Audrey, Eric, and Kolbe, for a great first race in the baby blue!

- Just a side note…Friday ride is getting better and better.  This week we finished in just over an hour an 15 minutes, a far cry from our obnoxiously long ride time from the first Friday ride of the year.  New riders like Miguel, Kolbe, Sara, Audrey, and Eric, are bringing smiles to all the older members of the team.  Lastly, the Harry Monster is back on the rise!  On Friday, he made us all look silly and won the final Friday ride sprint by three or four bike lengths.  Today on our epic ride of Jacks, he looked great getting up the climb in second place.  Eric did outstanding as well.  I don’t believe he had ever ridden 50 miles before…and he certainly held in there this afternoon as Harry and I picked up the pace towards the end of the ride.  Another added bonus has been the presence of seniors Thomas and Kyle Kissock.  Great to be riding with those kids again.  Until next time…this is your faithful blog-master saying goodbye.