…with the rest of the ECCC

This past Saturday and Sunday in New York City can only be described as Bucknell Cycling’s weekend.  With the four B men riding together for perhaps the final time this season (with Sam and Lazer moving up to A’s)…the team was primed to dominate both the Grant’s Tomb Criterium and the Stevens Road Race. 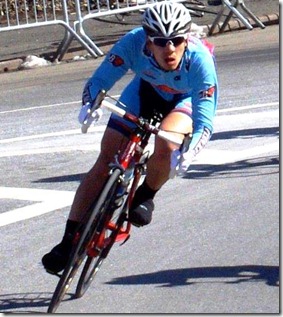 The weekend started with everyone apart.  Lazer and Wade headed to Wade’s house in NJ, while Harry headed home.  Sam and I traveled with Papa K to our housing for the weekend on Columbia’s campus.  Everyone was to meet the next day at Grant’s Tomb.

Before I get into the racing, the team (especially Sam, Papa K, and I) would like to extend a heartfelt thanks to the Straton’s for hosting us this weekend.  Their hospitality was first class.  Sam and I were exceptionally well fed with home cooked meals and delicious bagels from local New York supermarkets.  The Fairway salsas and cream cheeses were especially awesome.  We enjoyed a comfortable pull-out couch for both Friday and Saturday night, and were allowed to take over the Straton’s living room with all of our baby blue equipment.  Our bikes even got their own parking space on the bottom floor of the apartment complex!  Thanks again!  What awesome hosts.

Saturday morning started with Sam, Lazer, and I meeting up for some USAC racing to get the legs warm for the afternoon.  Lazer forgot his chamois…(whoops) but managed to muster up the courage to ride the morning in non-padded tights.  Both races were complete goon fests…but out of the 80 riders, Lazer started his domination of the weekend with a victory!  I came in 8th after almost being run into the barriers at the finish.  Sam did well to finish in the cat 3 pack despite some crashes in the field and a bicycle that randomly shifts on him whenever he stands up.  All in all, we left the morning feeling ready for the real racing in the afternoon.  Here is the finish picture—Dan pulling away from the rest of the field.  He’s going to fast to avoid the photographic blurriness.

After the early morning racing, Harry showed up and Lazer kicked into barbequing gear.  He spent the middle of the day cooking burgers for the general racing population in New York City with Wade and Papa K on the bridge outside the van.  Sam and I went back to the Straton’s for brunch—only to join everyone else later on.  Bucknell Cycling legend Kelly Dashark made an appearance mid-day to hang with the team and cheer on her king Sheldon.  High school/Colavita cycling god Alex Breakstone also came by with his Dad to mingle with the team.  We have our fingers crossed…if you know what I mean…

Harry, Lazer, Sam, and I went into the afternoon Grant’s Tomb crit with a plan—to kick some serious tail.  Here we are all lined up, eagerly awaiting sir Kopena’s instructions.  The yellow arm warmers were out…and Harry’s non-safety-approved Japanese helmet was perched a-top his head.  Both were clear indications that it was trouble for the ECCC right from the start.  I seem to be yawning for some reason. 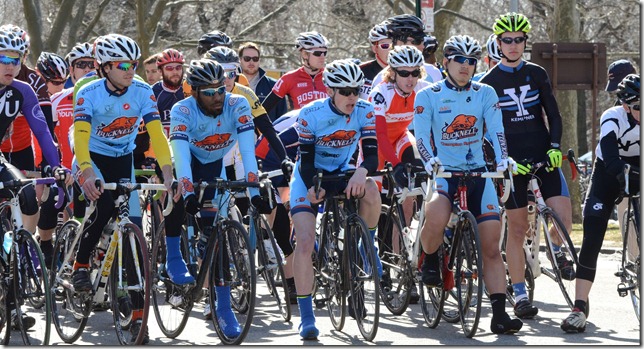 The men’s B crit started with all 4 Buckell boys feeling extremely good.  Some Yale rider dilly-dallied off the front for a while, but the pack zipped along at 24mph + at a smooth and steady tempo.  Everything was literally moving along fantastic, with the race being controlled by Harry and Lazer at the front…Sam and I hanging mid pack.  Unfortunately about half way through the race, I flipped over my handlebars in a crash and was eventually DQ’ed.  From the side of the road, I channeled the irritation from crashing into cheering on the boys.

Lazer, Harry, and Sam covered all of the attacks, bringing back a serious threat with 2 laps to go, and blurring the front of the peloton with a sea of baby blue.  Coming through with 1 to go, Lazer was on the front, with Sam and his master navigation skills ensuring Harry was kept in good position.

Coming around for the finish, a Yale rider had broken away from the field, but Lazer was leading the rest of the pack to the finish…taking second.  Harry was just a few riders behind, while Sam, having done some serious work to get Harry in position, rounded out the bunch sprint toward the back of the lead group.  We all rounded ourselves up, and departed to our respective living quarters to get ready for the next day of racing at Stevens.  I’ll now let the pictures do the talking…

The next day at Steven’s may have been some of the most fun I have ever had wearing a Bucknell Cycling uniform.  We all met at the course just before the start (Wade having ridden over on his new CAAD10!) with another great day of racing in mind…but we couldn’t have expected all 4 of us to place in the top 14.

The entire team (minus Sam <-----wimp) went with no leg warmers…so we were looking real good—but feeling pretty cold.  For the first few laps, the field zipped along at a normal pace, with everyone just kind of looking at each other and sizing one another up.  Being the first road race of the year, it was a slightly different dynamic than we had been seeing previously.  All four of the Bucknell men crowded the top places amongst the field…with all those trips up New Mexico, Supplee, Stein, Jacks, and New Berlin having paid off.

On the third lap, Lazer attacked really hard on the “big” climb situated about half-way to the finish.  Some riders tried to go with him, but the general consensus within the pack was “just let him go.”  Little did they know, Harry, Sam, and I were quite certain we would not be seeing Lazer again…and we didn’t.  Lazer has a special ability to ride very fast by himself over sustained distances.  Some people often call this skill “time trialing.”  During the 4th lap, some KMS kids started to get real nervous, and the pace really picked up.  Harry, Sam and I covered all of the threats, chasing down attack after attack to keep Dan safely out front by himself. There were numerous calls to “get Bucknell off the front.”  We were definitely handing it to the rest of the field and causing problems.  I have no idea what Lazer was doing, but I presume it involved placing his head between his legs and pedaling fast.  In the end, Lazer finished his 15 mile solo display with a 1 minute gap on the field, and capped off his second victory of the year with a well deserved celebration.  He will be “swimming with the big fish” in A’s come his next race.  (Along with Sammy).

The pack finished with Sam coming home in 5th…I was 8th, and Harry was just behind in 14th.  Harry pretty much dragged me up the final climb, so I owe my first B top ten to him.  We all gathered to congratulate Lazer on his dominant butt-whooping and said our goodbyes for the rest of spring break.  We were also sad to say goodbye to Kelly and Sheldon…but we will see them again at MIT.

Well…I guess the only way to end such a great weekend is with Papa K’s list of observations from the two days.  I am writing this on the way back from Philly…so yes…its late…and I apologize for that. Until I get around to writing about this weekend at the Phlyer…this is B Case – saying HOPE YOU ENJOYED THE POST! 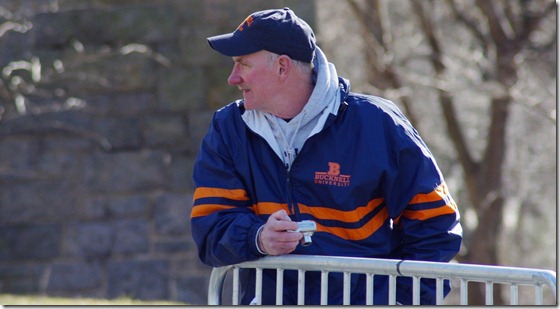 1. Sam’s bike was being repaired in the basement of an appartment building in New York City the night before the race. DON’T TELL PHIL.

2. Harry registered for the USAC race but didn’t show up…SLACKER

4. Lazer raced without his chamois, what a man.

8. Case had a dream last night that we slept in and missed the Sunday morning race.  He also dreamed he didn’t care.

9. I think New Providence NJ has a church for Turkeys 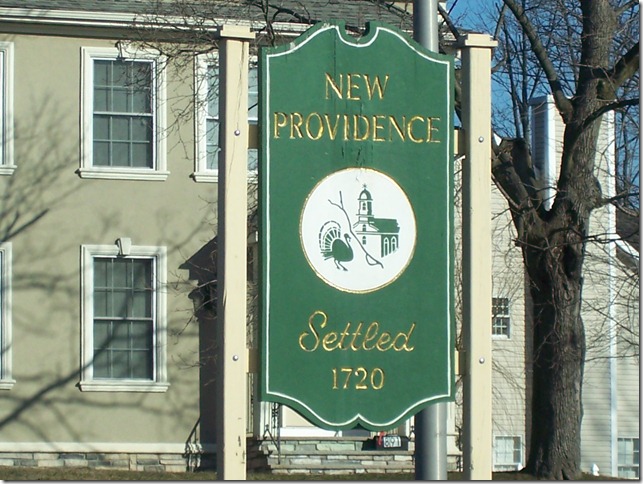 10. Lazer likes to swim with the big fish 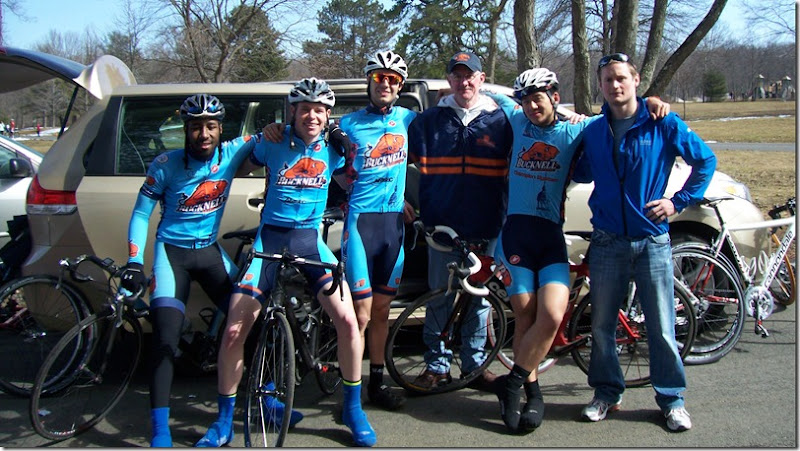