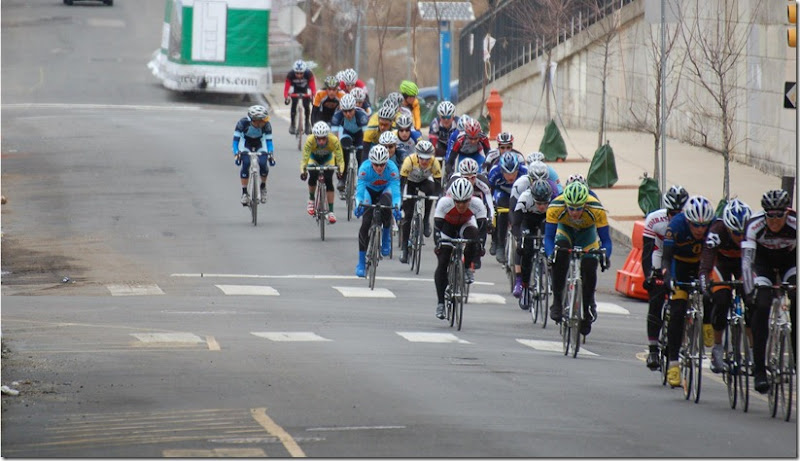 It is now April 9th, and I am writing about a race that happened about 4 weeks ago.  So yeah, this ship is certainly off course.  But today is going to be dedicated to catching up.  There won’t be any “abbreviated” race posts.  I’m whipping out the summaries of 4 weekends in one day.  Here we go.

Following the success at Columbia, it was only going to be Sam, Harry, and I at the Philly race weekend.  Harry, Papa K, and my dad and I, all arrived at the warm and cozy Tino household Friday night for pasta and salad.  We would meet Sam at the race course the next day.  The main concern when we woke up on Saturday morning was going to be the weather.  The forecast called for a chance of snow/rain/sleet, but the chances were about 50% or so.  In my ECCC career I have never had a bad day of racing when it comes to the weather—so I think we were due for some cats and dogs.

We arrived at the course with a feeling that the bad weather had passed for the day, but our St. Patty’s day luck would soon change.  First, we were issued a parking ticket for having a portion of our van on the grass (next to 10 other cars also parked on the grass who also received tickets).  It was a bit unnecessary if you ask me.  The funniest part was watching the park rangers driving all over the grass while they issued tickets for cars that were “ruining the grass by parking on it.”  We spent the next hour before our race costing the park rangers money by helping people get their cars off the grass before being caught.  Papa K had a great time with that.  In the end, we realized that the ranger had put the wrong ticket (it had the wrong vehicle license plate #) on our car…so we got out of it anyway.  Haha.  But seriously, check out the ironic situation above, with the ranger parked on the grass, ticketing someone else parked on the grass.  It’s a head scratcher if you ask me.

We did get some racing in on Saturday, and as I hinted at earlier, the weather was pretty interesting.  Joining the crew mid-morning included Bekah, Steph, Dan Wood (minus his hair), and Kevin Curran (who is now at Lehigh).  Sam was set for two road races on Saturday—the cat 3 with Wood, and then the Men’s A race later on.  Kevin, Harry, and I, were going off with the Men’s B crew.

To be honest, I don’t remember much about the circuit.  About 1 lap in, it started to snow, and then it hailed for about a lap, and then it started snowing some more, followed by rain, sleet, freezing rain, and every other kind of precipitation imaginable.  Both the cat 3 race and the Men’s B race (running at the same time) were cut short due to the conditions.  Sam decided to bag the Men’s A race (which was eventually cancelled) as we all huddled helplessly drenched in the car afterwards.  HOWEVER, Harry Chen put in a beast of a sprint toward the end of the Men’s B race to take 2nd place!  Here are some pictures Tino took before the weather got too bad.  The picture of HC mashing through the snow in the end is pretty awesome.  Notice above – I don’t ride with gloves (EVER).

After the race, we drove back to Tino’s new apartment to wash our clothing and decide on the plans for dinner.  We ended up getting some pizza from a shop around the corner, and enjoyed some of Arnold Schwarzenegger in Terminator 2?  Maybe?  I don’t know my Terminator movies very well.  Anyway, the Temple campus criterium turned out to be much more enjoyable the next day.

Cheered on by Bekah, Steph, Papa K, and Tino—Harry and I had a solid race finishing next to one another in 15th and 16th.  A breakaway had gone of the front early on the in the race and was never seen again.  Sam participated in his first Men’s A race of the season, and held on until about a lap to go.  Actually, he looked rather comfortable.  Here are the pictures from the newly re-designed Temple crit.  And thanks to Steph and Bekah for the cupcakes! 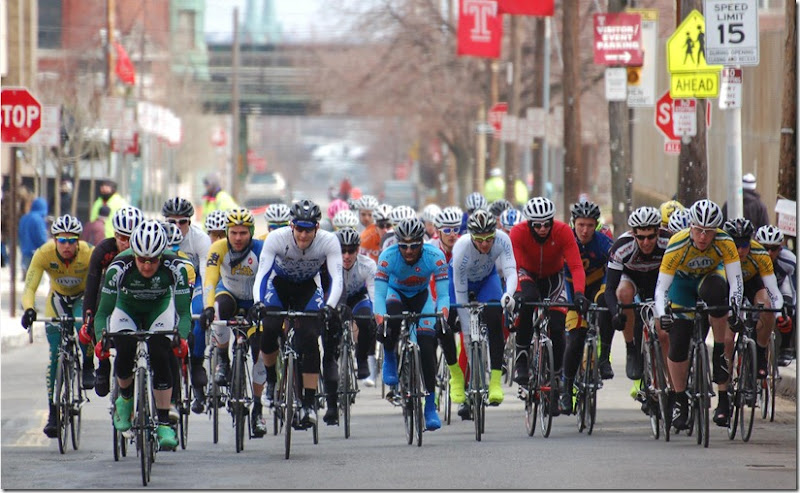 Overall, the Philly weekend was a pretty relaxed one.  Harry did awesome to start his string of top finishes with a second place in the snow-filled circuit race, while Sam looked more than ready to take on the rest of the year in A’s.  It was great to hang with Kevin, Rebekah, Steph, Wood, and of course B Tino and his parents.  There was however the following event, which I did not know was being photographed.  Apparently when making faces during Harry and I’s crit warmup, Tino was on the ball to capture the moment.  So here ya go, one of the goofiest trainer photos in history (left).

A big thanks to the Tino’s for hosting us again this year.  It is one of my favorite places to stay during the season, and the food is always top notch!  The next weekend after Philly the team travelled to its first ACCC race ever!  I will be posting the Navy weekend summary when I get a chance.  Papa K’s observations from the weekend are below:

3. I did not know that Case wears women’s jerseys

6. It is not always sunny in Philadelphia

7. Sam was saved.  They canceled the A race.

8. My camera holds 18 pictures without an SD card.  Thanks for picking up the slack Tino.

9. Quote: When Sam ‘s in a race, EVERYTHING SEEMS CALMER

10. Cupcakes are good even when its old out.  Thanks Steph and Bekah

11.  Another awesome weekend of host housing thanks to the Tino’s.  And while I’m at it, thanks to the Straton’s for hosting us for Columbia/Stevens.  It makes a big difference and Case doesn’t worry as much about the budget.

12. Saturday will make the list as one of the worst race days as far as weather is concerned.  But as I sat in the van at the end of the day with the heater blowing—thawing out my bones, I bit into one of mama Case’s chocolate chip cookies and all was right with the world.