Bucknell Cycling Competes Out-of-Conference in the ACCC…HC Gets a Win! 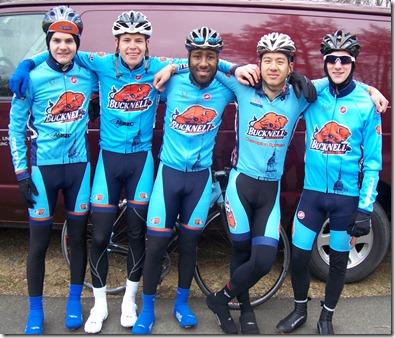 When the ECCC schedule was announced in the early winter, this weekend was the awkward unknown.  Initially, the ECCC had the weekend as “TBA,” so we went to work on finding some alternative racing options.  Conveniently for us, the ACCC was holding their northern-most race at the US Naval Academy, just 3 hours from Bucknell, so we jumped at the chance.  Along for the racing with me included Harry, Sam, Eric, and Tom.  Some other members of the team had other things going on at Bucknell.  Something about houses having parties? I don’t know, I am still confused.

The experience with a new conference was an interesting one.  The ACCC has a much different dynamic than the ECCC.  Beside being a bit smaller, the conference standings are dominated primarily by large universities.  There are far fewer small liberal-arts colleges and other division two universities competing.  The main contenders for the ACCC crown, as we soon learned, usually includes Navy, Duke, Virginia Tech, and North Carolina State.  Others who fielded large teams included UNC, William and Mary, the University of Virginia, West Virginia, Johns Hopkins, Appalachian State, and VCU.  Getting to know the culture of a different conference was certainly refreshing.

The criterium on Saturday looked like the outline of mickey mouse's head from an aerial view.  With two 180 degree turns (one of which followed a sharp narrow downhill) and a small climb up to the top of the cemetery, it was certainly a unique course.  Navy’s campus is a very picturesque setting, with people running, walking, training, blowing things up (kidding), rowing, and just being active.  The whole campus was up and going very early on Saturday morning—quite unlike most campuses.

I had the team at the course by 8 in the morning—and we were the first team there (awkward).  Tom was the first to go off in the men’s D race, and despite some anxious nerves, worked very hard to do well in a field that split entirely to pieces.  It was Eric’s first weekend in C’s, and again, the race split into many small groups.  It wasn’t Eric’s best day, but it certainly wasn’t a disaster.  He finished in the middle of the field and drew his attention to the next day’s road race (which is much more suited to his skill set).  After Eric finished, Harry and I battled through a pretty active B race.  One of the commonalities that we noticed in the ACCC was in the importance of sprint points.  I think more points are up for grabs in the ACCC than in the ECCC, and with only 3 major schools really contending for the title, the sprint laps are like finishing laps.  The field was blown to bits by attacks from Virginia Tech and Navy riders, until Harry and I composed a group of about 11 at the front.  Around the final turn to the finish, I was 5th or 6th wheel, while Harry was second.  Harry made up a tremendous gap on the leading rider to finish first in the criterium!!  For the second straight week, Harry had a top 2 finish.  I held on to 6th.  Sam did well to stick with the A race, which was made extra difficult by the excessive amount of sprinting required out of each of the 180 degree turns.  Here are the pictures: 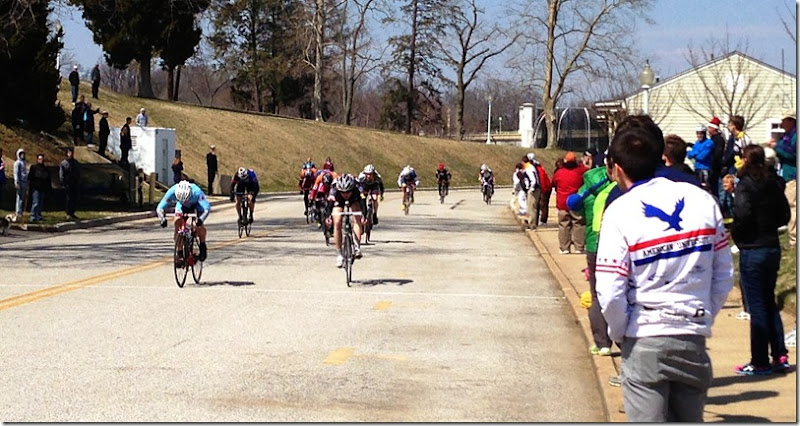 After the criterium, the team hit up the Annapolis Mall for the second day in a row, enjoying some fresh Chipotle Mexican food both nights. We had to get to Virginia however for the next day of racing.  The road race was also something a little different than we are used to in the ECCC—having significantly less climbing than seen up north.  The course’s roads were spectacular—brand new and freshly paved the whole way, situated in a state park with little traffic and lots of tree cover.  Sam was off first with the A’s, while Harry and I followed five minutes behind in the B field.  In both the A and B races, a breakaway was established and then never caught.  In the A field, every major team had a rider represented, so the A peloton essentially stopped racing.  Sam later commented that it was one of the more bizarre races he had ever experienced.  Harry and I held in with the lead chase group—coming in for a respectable 9th and 15th.  Sam made a move at the end of the race to grab 15th—one of the first finishers from the peloton.

Eric was super pumped for his first significantly long road race in Cs.  One could tell he was nervous, but the legs he had from training around the Lewisburg ridges throughout the fall had him more than prepared.  Each time by, Eric was definitely digging hard to stay with the main pack, but he still looked comfortable, especially as the pack ramped up the only major incline on the course.  With 1 lap to go, an attack split the C field somewhat, and Eric hung in with the second big group on the road.  He finished a very respectable 15th.  This ended up being Eric’s last race of the season.  We look for Eric to keep improving as a C rider next season, and hopefully an upgrade to B’s??

Tom’s field blew to pieces right from the outset.  For the majority of the passes by our cheering section, Tom was by himself, riding about 6th or 7th wheel for most of the race.  He had to navigate the women’s B and C fields as well, both of which had intermixed with the D race during the 2nd and 3rd laps.  In the end, Tom finished 7th following a well fought out sprint with a rider from William and Mary.  Here he is coming in for his finish. 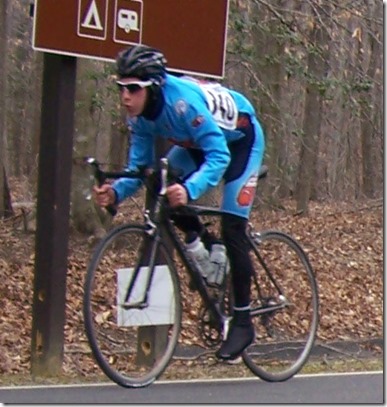 Papa K’s Observations from the weekend:

1. Lazer won two weeks ago.  I haven’t seen him since.  Where could he be?

2. We have two motels this weekend—each within five miles of each day’s race.

4. Hot tube and a free bathing suit.  You can’t beat that.

5. Case races better when he sleeps with Sam.

6. We were the first team to show up to the race on Saturday.

8. President Case ordered Harry to win.  So he did.

9. Sunday morning, NO COFFEE.  Sam felt he could win if he had coffee.

10. They yell at you if you don’t wear your helmet.

13. Dear Audrey—I took some pictures just for you (see below).

(see Rutgers blog post if you don’t get it)