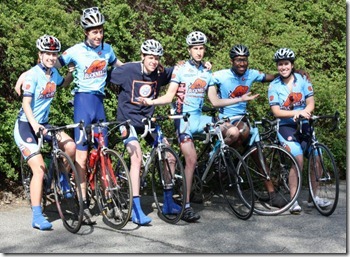 Bucknell’s trip to the US Military Academy in West Point, NY can easily be marked as a defining moment of this year’s season. The atmosphere amongst the team was calmer than usual on Saturday morning upon our arrival at the course, and as the weekend wore on, I got the feeling a torch was being passed. Everyone on the team knew it was going to be President Tino’s final race, so that contributed to the feeling, but I think there was more lying beneath the surface. After a long and hard fought year, the early carefree rides of fall were long in the distance past, while the punishment from a long season was definitely being felt in everyone's legs. Thankfully, the team’s immense success on the road at Army made the weekend bitter-sweet. It will be hard to arrive at the DHLC next year for “Tino Monday Ride,” with Brian no-where in sight. Yet, for one final weekend, we had our President alongside us, who despite his Voodoo-ness, did a great job this year leading the team. I’m definitely going to miss this year’s team, and the tightly knit bonds we created along the way.

In total, six Bucknell racers set out to compete at Army: Tino, Sam, Kelly, Christine, Zander, and myself—joined of course—by Papa K. Friday started out like usual, full of jokes and laughter as our four hour car ride got underway. As tradition has dictated throughout this season, Friday is the night for pizza 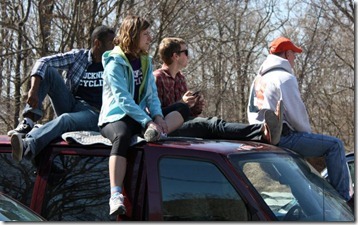 and conversation. There was plenty of both to go around. Kelly even had the chance to stop off at “T.G.I. Maxx” to look at some dresses for graduation. Sam's description of her shopping style was that it was “fast and authoritative.” Kelly knew what she was looking for, and after a fast military style sweep of the store, she wasn’t satisfied. The team finally arrived at a 5-star palace of a motel, booked perfectly by our President himself. Despite the grumbling about the accommodations, I think that a sub-par hotel brings the team together, and definitely adds to the experience—so thanks President Tino, for keeping us on our toes.

Saturday morning brought the Team Time Trial. Zander, Sam, Tino and I set out on the 15 mile course and put forward a respectable time in mens B, allowing us to collect 24 points toward the team standings. Zander did great in his first TTT, sticking with the three of us for the majority of the race. Tino and I set the pace up the climbs, while Sam bombed it down the descents. Again, I felt some sadness come over the group at the finish. It would be the final time I compete alongside President Tino, and he put in one hell of an effort to get Sam and I to the finish. Thanks to my mom and some others, we have some pretty nice pictures of the TTT:

Following the Team Time Trial, it was time for the circuit race. Similar to the Yale circuit from the week before, the circuit race was essentially a hill-repeat session, paired with a nasty and tricky descent that was full of pot holes and the occasional bit of rough road. Zander and I lined up for the combined C circuit with success in mind. After a hard fought first few laps, I settled in to a nice rhythm at the front of the main pack, while Zander lead the second main group on the road that had split off about two thirds into the race. The circuit ended up being 8 laps long, full of violent crashes, with some tough climbing along way. The course suited me perfectly, and my legs felt fantastic heading into the final sprint to the finish. I accelerated after two riders in the final dash to the finish and came in for 3rd in a combined field of about 80 riders. Little did I know, I ended up winning the C2 category, a “win” that I still wont accept, as two C1 riders did finish in front of me. Zander did a great job as well, putting himself well into the pain cave to finish off the race in 15th among C2 riders. Zander left the circuit slightly disappointed, and it showed on Sunday as he took it to the C2 field with some exciting racing in the crit.

In the men’s B circuit, Sam and Tino lined up for what would end up being a brutally fast race. One rider established a huge gap on the rest of the field, followed behind by three or four chasers, and then the main pack. Sam consistently controlled the front of the main field for the majority of the race, hanging in despite his recent troubles with climbing the past few weeks. Tino was exhausted from the TTT in the morning, sticking with the main field for about half of the race before tailing off in the end. Both rode just ok on Saturday, but they made up for it on Sunday with some awesome racing in the Army crit. I’ll get to that race later, it was a exceptionally exciting race by both Tino and Sam.

The Women of Bucknell were up to the challenge of the circuit as well. In the womens intro race, the ever-cheerful Christine did well to pick up three points for the squad, placing 7th. She also did a fantastic job as navigator for the weekend…allowing Zander, Sam and I to be bums and sleep in the car…so thanks Christine! Kelly took control of the Women’s A/B race, again asserting her force on the best of the ECCC women. In a long 55 minute circuit, Kelly placed and impressive 2nd overall, way in front of the series' top female: MIT’s Katie Quinn. All those Tuesday Torture Rides definitely paid off for Kelly in this one, as she looked cool, calm, and comfortable in navigating the climbs. Here are the top Bucknell men and women at the West Point circuit race: 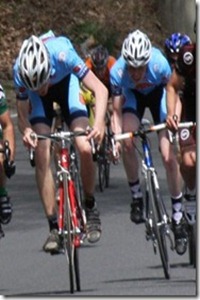 The men’s B criterium was one of the most exciting races of the year. It would be the last time President Tino kitted up for a race in the ECCC, and he and Sam came to play for the occasion. Early in the race, attacks were fast and furious, with a three man group establishing itself early on. Before the break broke free, Sam and another rider from UNH blitzed the field on the first sprint, allowing Sam to take 2nd. On the second sprint lap, Sam flew off the front of the field in a mad dash for points. He rode solo behind the 3 leaders, screaming the whole way with his face wide open in pain taking 4th in that sprint. In the third sprint, he took 3rd. The one thing I admire about the way Sam races is that he only has one gear: full throttle. He goes as hard as he can, moving to the front, destroying the back of the pack even if he knows he may have nothing left at the end of the race. Tino sat in behind Sam, often using his draft to conserve energy, lowering himself in typical Tino fashion into his aerodynamic position when the race became tough. The two were often in the top five places in the main field every time through the finish line. At the finish, Sam came around the final corner in 6th, falling to 11th at the line. Tino’s final stand had him taking 14th. Both men placed in the points, and were praised by the ECCC commentators for a hard fought race. It was a exciting way to send the President out. 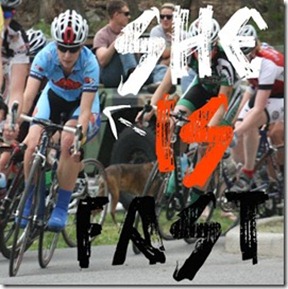 Last but certainly not least, it was Kelly’s turn in the womens A/B criterium. Kelly would later describe this race as one of the toughest she has ever done, but she didn’t show it. Cheered on by the entire team, she and the rest of the field pulled back a few Katie Quinn breaks and allowed the race to come down to a field sprint. Along the way, Kelly picked up two placings on the sprint laps, while at the finish, Kelly was 6th in the combined field. Here is Kelly in the crit. She was definitely helped by the great night sleep she had gotten the night before, amidst the world-class beds at the motel. 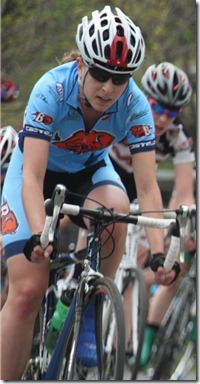 In conclusion, this was one great weekend. I stand by what I said at the outset of this essay-of-a-post. This race was definitely bitter sweet. With the departure of President Tino, Kelly, Christine, Billy, Josh and our other seniors, the sadness began to come over the team this weekend. The racing is not over yet, as Sam, Kelly, Lazer and I will be attending Easterns at UNH this coming weekend. Nevertheless, I am thankful for all that the cycling team has given me this first year: a great group of friends, an opportunity to escape the Bucknell bubble, and the chance to race at a competitive level all across the northeast.

From the pizza, to the antics of Papa K, to the exceptional racing this season from the Bucknell team, I could not help but describe this season as an overwhelming success. For those of us who are attending next weekend, lets have this year go out with a bang. For those who are finished, the team thanks you on behalf your contributions to the team this season. President Tino: I cant wait to have you come back next season so you can have the opportunity to get your behind handed to you on your precious climbs like Supplee and Stein. So train up, for this season is almost over, but the pride of Bucknell Cyling never ends.