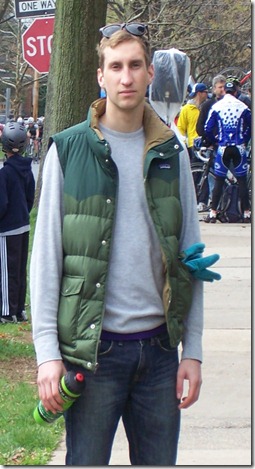 The fifth weekend of the Bucknell cycling season saw a full squad of riders attack the roads of State College at Penn State just over a week ago.  Armed with participants in virtually every category, the team was a force to be reckoned with at Penn State, picking up three podium finishes on-route to a highly successful outing.

The weekend started off with a quick hop and a jump over to State College where we met our escort for the weekend: the ever-gracious Mr. Lazier, who supplied the team with prime hotel accommodations.  He is also the owner of our title sponsor – AMSEC Securities in California – so we have a lot to thank him for.  Thanks a lot Mr. Lazier!  It was great to have you along. 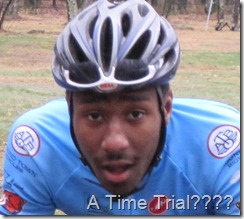 Friday night was filled with excitement, highlighted by a team viewing of the original “Star Wars,” it is safe to say that the Bucknell riders were ready for the intergalactic battle that awaited them the following morning – the beastly “Black Mo.”  Upon our arrival at the park, LazerBeam and I happily informed President Tino that all of the food we had caf-stole the day before was sitting safely back in our hotel room, as we had forgot to bring it with us.  Obviously, in this unfortunate location, the food was now unable to be of any use to the team.  For this bone-headed act, President Tino put the C-Men on probation for the rest of the weekend.  I will admit, we deserved it.

Much to the chagrin of Mr. Sam Cowans, the racing began with a 9 mile team time trial amidst the fog of the early morning.  Sam, President Tino, LazerBeam, and I, set out for the journey as a men’s B squad.  I lasted all of two and a half miles, leaving the other three to battle out the rest of the course without me.  Despite the usual team time trial difficulties, and some opinions from Sam about the course that were less than flattering, the team did quite well.  They ended up passing the team that started in front of them, and placed 5th overall amongst the B men division – picking up 30 points to go toward the overall standings.  Check out this awesome picture of the four of us, moving our way through the early misty morning.  Pretty eerie if you ask me. 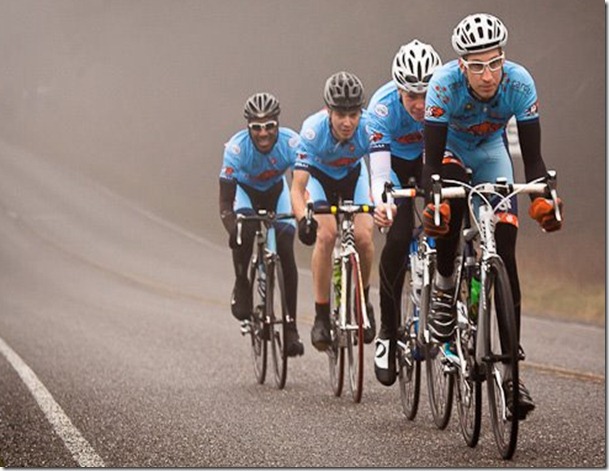 The road race was grueling.  Highlighted by three substantial climbs, and a long decent into the valley to start.  The race then capped itself off with the punishing 6 mile trek up “Black Mo.”  It was safe to say that the course was nothing to laugh at.  The D men: Max and Billy, hit the course first, climbing Black Mo once and finishing off the twenty mile race strong.  In what may have been Billy’s final race, we have an epic shot of Billy at the finish, coming in 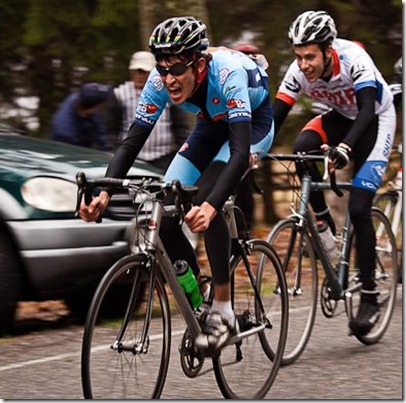 11th just outside the points.  Personally, I would love to have Max and Billy at some more races to finish out the year.  From Max’s subtle humor, to Billy’s masterful parking abilities, both are great kids to have around – props to the D men.  In the C road race, Zander joined me and LazerBeam for his first race of the year, and absolutely killed it.  LazerBeam and I started a little slow, and had some early difficulties navigating to the front of the combined 60+ man field.  Zander on the other hand, went right to the front, eventually holding on strong with Dan and I in a select group of twenty or so heading up Black Mo.  Zander and I tailed off slowly from that group, while Dan accelerated up the climb, using his California roots to stay within striking distance of the leader.  He descended the mountain in 3rd place and held on…for the first Bucknell podium finish of the weekend.  I came in in the second main group on the climb, avoiding a crashing rider in the sprint for the finish to place 9th overall.  Zander came in a few minutes behind in 20th place, an excellent finish for his first road race.  Even while on probation, the dominant Bucknell C-Men turned in every rider in the top twenty—a great effort. 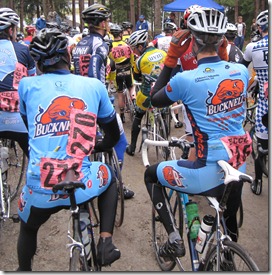 The B road race then began, headed off by Bucknell’s own President Tino and Sam Cowans.  In two laps and 40 miles of the course, President Tino turned in a solid finish, placing 23rd.  Despite being called “Kelly” by the cheering C and D-Men, Brian never lost his cool during the action.  Unfortunately, following the race, the C-Men were in hot water, and were placed on double probation for the inappropriate antics.  Finally, it was the golden girl’s turn.  In the womens A/B race, Kelly was joined by the legendary Voodoo Tino, strapped to the back of her seat post for good luck.  This decision would soon have repercussions however, as Voodoo Tino caused Kelly to crash into a hay bail on her first lap, hindering her chances at victory.  The ever resilient Kelly, battled through the adversity, and placed 5th on the day, mostly due to the twizzlers that Papa K supplied to her at the start of her race.  Check out some pictures from Saturday.  As always, a full slate of pictures from the weekend can be found on the facebook page. 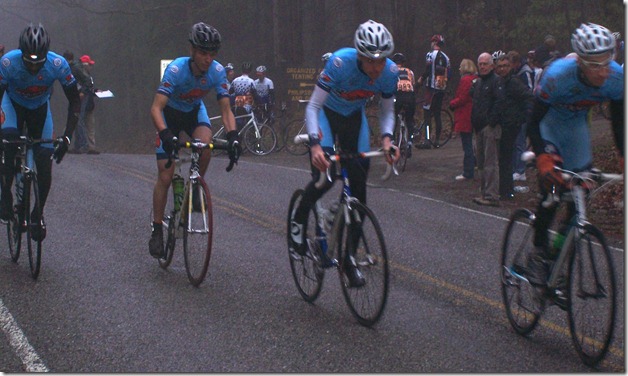 The Penn State Fraternity Row Criterium the next day was certainly a change in terrain from the mountainous road race of Saturday.  Following a trip to the Meyer Dairy on Saturday evening, and supplemented with a great Italian dinner courtesy of Mr. Lazier, the Bucknell cyclists hit the crit course with fury – full of ice cream, pizza, milk, and milkshakes from the night before.  Max and Billy rode well in the D crit early in the morning.  Billy stuck with the lead pack of riders, and came in for 14th in a large D2 field that splintered to pieces throughout the race.

The C-Men were to follow.  In a split C2 field, the Bucknell C’s of Zander, Lazer, and I controlled much of the race, with Zander and Dan picking up a substantial amount of sprint points.  Zander remained second or third wheel throughout, combining with Dan’s many attacks that shook up the field.  In the end, Zander placed 2nd overall, the second poduim finish of the weekend for the team.  I came in just a few meters behind in 8th, while Dan followed in 15th.  “Big ups” to Zander for an awesome effort in his first weekend, hopefully many more to follow!  Check out some pictures from the trio of Bucknell C’s in the Penn State Crit:

In the Men’s B crit, it was Sam and Brian’s time to shine.  Encouraged by the favorable course layout, it was easy to tell that Sam was excited at the prospect of a pancake flat, hammer-fest criterium course.  In typical Sam fashion, he went right to the front early on in the race, pushing the pace on the first few laps, and causing some serious hurt at the tail end of the field.  I will honestly say that watching a race scream past with Sam on the front is a sight to see…its really fast.  In the end, both B men stayed easily with the main pack after the splintered riders tailed off about midway through.  The boys came in next to each other in 16th and 17th in a field of well over forty riders. 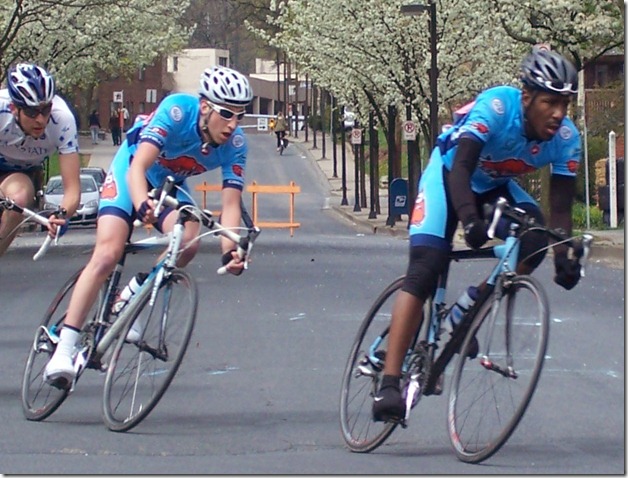 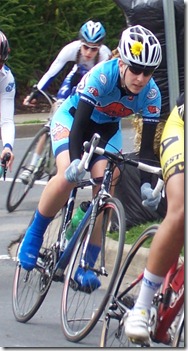 Kelly kept the race in check, hanging out in the middle of the pack, and working with her fellow companions to prevent a Katie Quinn solo break from happening.  In the final sprint, Kelly surged up the pack on the right side, flying by a huge pack of riders only to loose the race by a meter or so.  Kelly’s 2nd place finish was the second Bucknell podium of the day, and the third of the weekend.

By the end of the weekend, the entire team was surely exhausted, which is why we decided to head over to Meyer Dairy Sunday afternoon for some more ice cream before the journey home.  I think most of the time, pictures tell the story of the weekend, and this one, being a great weekend, I have decided leave you all with some more pictures from our time at State College.  Three podiums, the continuing adventures of Voodoo Tino, and some great performances by new riders: Zander and Christine, were the highlights of the weekend.  This weekend at Yale, the immense success of this young team continued.  I will be sure to bring you the events of Yale later in the week, but until then, this is your helpful cycling correspondent signing off…over and out.