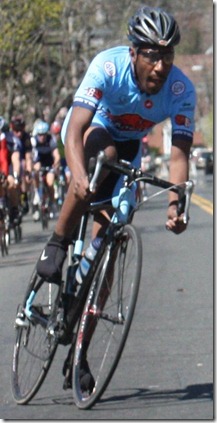 One of the greatest aspects of the sport of cycling is that the playing arena is boundlessly variable.  One weekend, the courses are flat and windy, made for those big power-diving cyclists who can put it in their big ring and hammer out a victory in a closely contested pack sprint.  Other weeks, the courses are made for the nimble and agile climbers, who can softly petal away in a steady cadence, shedding all the big guys off the back.  Whatever the terrain, nothing beats a beautiful course that touches the hearts of all the cyclists that ride it.  At Yale, the team was presented with a spectacular arena to show off.  That course was called: “The Rock.”  It’s one of those races that conjures comments from riders following the race like: “wow those switchbacks were awesome,” or, “that decent was so smooth, fast, and fun.”

For the sixth weekend of the ECCC season, Sam, Lazer, I, and Papa K made the 4 hour trek out to New Haven, Connecticut to set our rubber wheels to this great arena, and we did so with much success.  After stopping off for the usual pre-race meal of pizza late Friday afternoon, we arrived at the hotel stuffed to the brim and fully satisfied. Upon our arrival, Papa K made a keen observation: “never book a hotel room on the highway side of the building.”  This complaint eventually turned into was a long list of observations made by Papa K that would expand throughout the weekend.  We wrote them all down on a piece of paper as the days wore on, eventually compiling a pretty funny list of ideas. 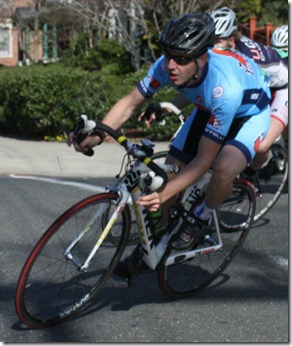 Friday night I had a horrible dream that we had missed the Saturday road race because we had arrived over an hour late.  I’m not sure if this dream was facilitated by Dan’s cuddling with me all night, or if it just spawned on its own, but whatever the case, I woke up Saturday morning with a fear that we had slept in and missed the race.  Acting upon this dream, I was pretty paranoid Saturday morning, insisting that we get to the race early to ensure our spot in the field.  From this, the second Papa K observation of the weekend was made and recorded: “many believe CaseRace to be a prophet.”

In the time trial, Dan rode very well, motivated by his quest for the C polka-dot jersey at the conclusion of the weekend.  He battled to 14th place on the road, while I mostly used the TT as a chance to feel out the climb for the road race…or so I would claim afterword…for my time was pretty abysmal.  I think its fitting to describe Sam’s time trial with the following three pictures…can anyone pick out the one that doesn’t belong?

The road race later in the morning was one of the most difficult and painful I have done thus far in the collegiate season.  With only a 45 minute tim 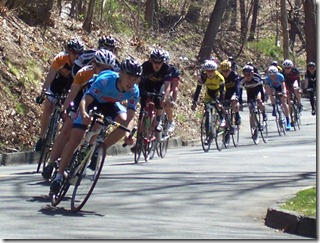 e span set for the C circuit, Dan rightfully calculated that for him and I to do well, we would have to push the pace on the first lap up the climb to increase the amount of total laps, and thus increase the total amount of climbing in the race.  I mostly thought this was a joke, but apparently, Dan was dead serious.  Heading up the rock the first time through I was shocked at how fast the pace was going.  Then, I looked up ahead, only to observe my buddy Lazer sprinting off the front of the field and screaming up the climb at a vicious pace.  Dan influenced the field speed so much that the race organizers announced an extra lap had been added to the race on our first trip through the staging area. Our pace continued to increase up the climb on the 2nd and 3rd laps.  My eyeballs were popping out and riders where being shed of the back on our way up the climb left and right.  The C2 pace was so fast that we caught the C1 field that had started 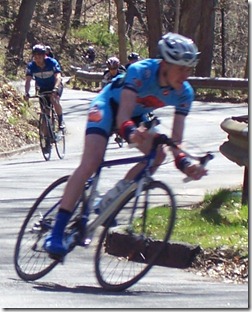 over 5 minutes in front of us.  On the final accent to the finish, Dan tried hard to stay with the lead riders, coming in 4th place, while I followed right behind in 8th.  The polka-dot jersey had alluded both of us at this point in the day, but we both agreed that our efforts had made that race one of the hardest paces of the season for the C field.

When Sam finally woke up following his day long slumber, it was time for his B circuit.  I supplied Sam with two CLIF brownie flavored granola bars, insisting that with all of the sleep he had gotten, there was no excuse for him to loose contact with the pack.  From this, Sam informed us all with a smile that he “never recalled ever being dropped” at any point in his racing career. This quote was of course added to the Papa K list of observations for the weekend.  Still feeling his way into his climbing legs, Sam stayed with the pack for the first half of the race, and then dropped into a chase group later on.  After 8 or 9 trips up the rock, Sam finished in the twenties after a hard fought 90 minute race.

The picture of the Bowdoin rider below is my friend Andrew that I used to race with back home on my old junior team.  It was nice to have him in the pack with us for the first time this season.

The Criterium set for Sunday was somewhat technical and was therefore often marred by many unnecessary crashes due to the poor conditions of the roads in some areas.  In only his second true criterium of the season, Dan controlled a great deal of the pace in the combined C Crit.  I hung out in my usual top twenty position, yet still tucked away from the wind.  In the final field sprint, the mere mass of Vermont riders were too much.  They sent a man off the front with about 1 to go, stretching the field out and making it difficult to move up.  I sprinted for 11th overall, while Dan followed my wheel through the traffic for 15th.  We got some awesome pictures of this race.  Check out Dan and I: 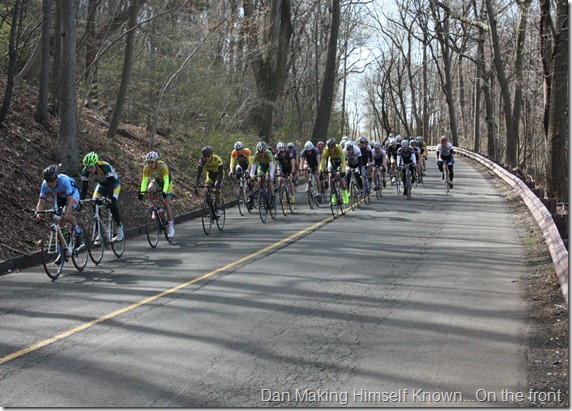 In the B Criterium, Sam was awfully busy.  From leading a few laps, to chasing down breakaway riders, and bringing back hard attacks, Sam was all over the road, causing havoc and making himself known amongst the B riders.  Dan and I passionately cheered Sam to a solid 23rd place finish in Bs, right in the center of the pack.  Sam’s finish was slightly less than expected due to bad positioning coming into one of the final turns of the race.  Yet, throughout the past few weeks, and especially this weekend at West Point, Sam has been riding awesome in the crits.  Here are some pictures of Sam, on and near the front…at Yale: 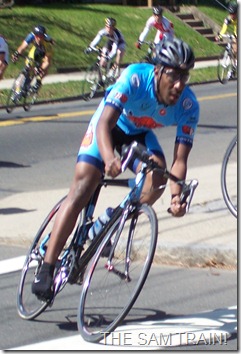 Overall, the Yale weekend was one of the best of the year.  Papa K, Sam, Dan and I had endless fun.  From making a trip to Best Buy to marvel at the big screen TVs, to “borrowing” a few of Yale’s race signs, to enjoying some quality racing from those in the baby blue, Bucknell can surely chalk the Yale weekend up as a success.

Other Papa K observations that I haven't mentioned previously include:

2. We should really bring folding chairs to the races.

3. The Yale race has great facilities…especially the bathrooms.

I will leave you all with a few more pictures from the weekend, and as always, the full slate of pictures courtesy of Papa K can be found on the facebook page.  Happy riding everyone.  Spring is definitely here, as if it never left.  The Army recap will be coming soon, a race that featured 4 Bucknell Cycling podium finishes, so keep a close eye out for that.  Until then, adios amigos, and RAY BUCKNELL!