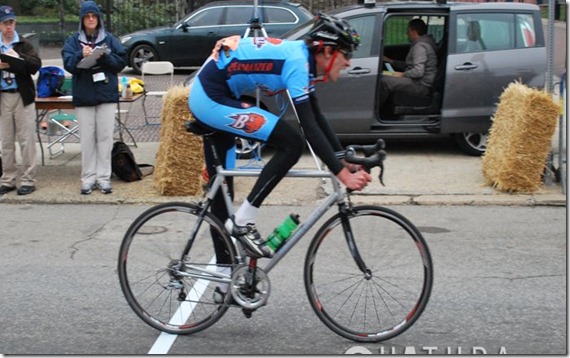 Sam and Tino’s Home Turf…Kelly in Yellow…Billy Tearing up the D’s! 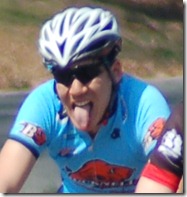 For the third weekend of the year, the Bucknell cycling crew headed off to the city of brotherly love for some awesome racing under the sun.  The weekend opened with a great pasta dinner at the Tino’s house.  The next morning, as usual, the team was up at the crack of dawn…we had a team time trial to get to!

President Tino, Harry, and I participated in the first team time trial of the season.  It was two laps of a 6 mile course with a pretty tough climb to close coming into the finish.  To start the race, Harry and Tino navigated me through the confusing turns at the outset of the course and once we got ourselves all straightened out, it went pretty well for the rest of the race.  Harry dropped the hammer on the flats and took some huge pulls along with Tino, sacrificing himself so that Tino and I could take it into the finish over the final climb.  In the end, we notched a top ten time in men’s B and earned some points to go toward the overall team standings. 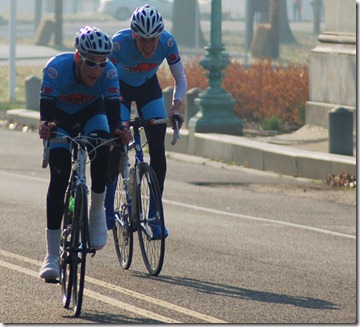 The weekend soon continued with the D road race.  Participating for the bison was Max and Billy.  Billy exploded this week with some huge results, placing here in the road race—in an impressive 6th place.  In the C road race, I found myself trapped amongst a massive field of 75 riders.  At the ability level of some C riders, this can often become a problem.  Many riders just randomly fell over throughout the race—a race that was riddled with crashes and many sketchy moments.  My climbing ability allowed me to move up the field coming into the finish and take 12th place overall, 2nd among division two riders.  In the B men road race, the newly created trio of Sam, Harry, and Tino made their presence known.  Sticking with a pretty large pack for most of the race, Tino sprinted to the points in 13th with Sam and Harry coming in behind in 24th and 28th.  In the women A/B race, the golden girl of Bucknell dawned the yellow jersey for the first time.  Kelly was unable to prevent a breakaway from spoiling her chance at a victory in yellow, yet, she stuck with the lead pack and came in for 5th.

The next morning, the team headed off to the campus of Temple for the Philly criterium.  In the D race, Billy yet again came to race, battling his way on to the podium in 3rd place.  A men’s C upgrade in Billy’s future?  Perhaps….  The C crit was pretty fast, which again was combined and caused some massive crashes especially coming into the fast right hand turn after the downhill section.  I was at my limit for most of the race, and came in for 13th overall in the combined C field.  The three Bucknell B men musketeers had a long 50 minute crit.  Tino was 16th, Sam was just behind in 17th and Harry came in for 22nd.  In the women’s A/B crit, Kelly did well to fight for 5th place overall again.  It was definitely a valiant tour in yellow for Kelly, one that I think everyone on the team would chalk up as a success.  In the end, this week taught us many things.

1.  You always have time, you just prioritize different things…commands Mr. Tino.  2.  Watching the movie before reading the book is what wimpy butts do…so don’t do it.  3.  It is always fun to be indecisive…it makes Tino angry.  4.  Harry loves his air mattress.  If you throw him outside and let him get mugged, he’ll be fine, he will still have his air mattress.  5.  Don’t ever put your bicycle on Tino’s bike rack, it will swing vertical to the road when travelling down the highway…which makes me and Kelly nervous.  A complete rap-up of the New Jersey race this weekend at Princeton will be coming this coming week.  Until then, happy good weather for riding! – CaseRace

P.S. Who is that guy in the red pajama pants next to Papa K?  …Only my dad who forgot to pack a pair of jeans—awkward.  Really bringing disgrace to the yellow jersey dad, not funny.