Two Times Tuesday: Not for the Vertically Challenged

Hello folks!  Fresh of our first race of the season, President Tino called a two-times Tuesday terror ride today—first the normal ride backward, then forward.  Lucky enough for Sam, Kelly, and I, we had class during the first half of the proposed ride.  Unfortunately, Harry was free for the double extravaganza and had to join Tino for an afternoon of serious pain—two times over.  Sam came out hammering today, flying up the early inclines to which Tino exclaimed, “now there’s our A rider!”  I won Stein today for the first time ever, so I’m now going to let that sink in for everyone.  The mountain score on the year is now Tino: a billion, Harry: a lot, Me: 1.  Hooray for that.  Ok ill stop blabbing  now, check out this awesome picture, courtesy of the creative mind of Mr. Tino.  Bombs away everyone…it’s a blasting area. – CaseRace 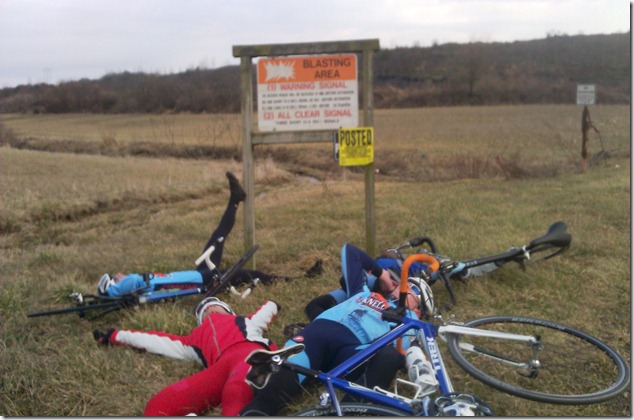